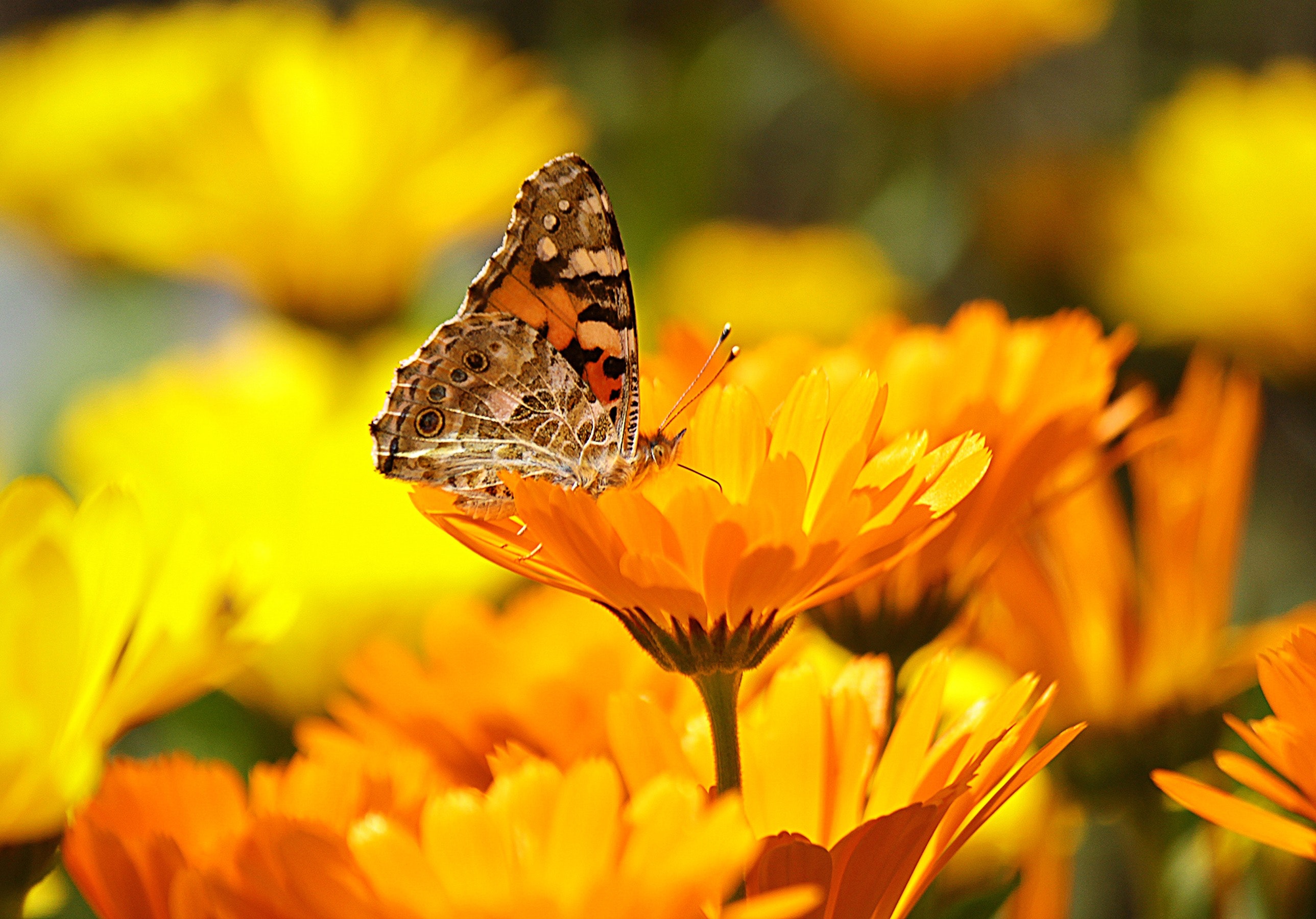 Calendula officinalis or Marigold has been one of my favourite herbs for years. I can’t even remember where I first heard of it but I know that I always have Calendula ointment in the house because it’s useful for many ailments. I burn myself at least once in winter as I’m adding wood to the fire and I put Calendula ointment on it straight away. It stops burning within minutes by reducing inflammation. It’s great for cuts, no matter how deep they are. My son scratched himself badly on concrete around our pool and once the wounds dried up a bit Calendula ointment went on. I know kids heal fast because they are so vital but I still put it on. I also worked out that it is great for cold sores and warts topically.

Internally as tea or tincture it’s wonderful for inflammation in the gut, cramping and duodenal ulcers. It reduces cough. I can’t imagine having my herbal dispensary without it as I use it for patients over and over. More information from www.herbwisdom.com

Marigold or more commonly Calendula has been used medicinally for centuries. Traditionally, it has been used to treat conjunctivitis, blepharitis, eczema, gastritis, minor burns including sunburns, warts, and minor injuries such as sprains and wounds. It has also been used to treat cramps, coughs, and snake bites. Calendula has a high content of flavonoids, chemicals that act as anti-oxidants in the body. Anti-oxidants are thought to protect body cells from damage caused by a chemical process called oxidation. Oxidation produces oxygen free radicals, natural chemicals that may suppress immune function.

Calendula has been considered beneficial in reducing inflammation and promoting wound healing. It has been used to treat a variety of skin diseases and has been seen effective in treatment of skin ulcerations, eczema, juvenile acne and dry phthiriasis. Improvement has been seen in as little as 3-4 days of treatment according to the Universitatea de Medicina si Farmacie.

Calendula is one of several herbs used traditionally to treat conjunctivitis and other eye inflammations as it helps to reduce the swelling and redness of eye infections. It is also believed that calendula may have some anti-spasmodic action, and as such, it has been used to relieve menstrual cramps.

Calendula is used to aid the healing of wounds and internal and external ulcers. It is an anti-septic and improves blood flow to the affected area. Some clinical studies validate the early treatment of stomach ulcers, although further research is needed (Chakurski 1981; Krivenko 1989).

Calendula cream is good for acne and nappy rash. An infusion is good for digestion and relieves colitis and symptoms of menopause. As an anti-fungal agent, it can be used to treat athlete’s foot, ringworm, and candida. The tincture applied neat to cold sores encourages healing.

Calendula contains chemicals, which have been shown in animal studies to speed up wound-healing by several actions that include increasing blood flow to the affected area and promoting the production of collagen proteins. Calendula also possesses anti-septic and anti-inflammatory effects due to its flavonoid content. In mouthwashes and gargles, calendula soothes sore throat or mouth tissue; in solutions, it has been uses to treat hemorrhoids.

Compresses of calendula blossoms are helpful for varicose veins. Results from recent animal and laboratory studies show that calendula may also have some anti-infective properties, particularly against fungal infections and against viruses.

Calendula’s high-molecular weight polysaccharides stimulate immune system activity (Wagner 1985) and has been researched for immune system activity. It was initially determined to have some potential therapeutic activity against the human immunodeficiency virus (HIV): extracts significantly inhibited HIV-1 in vitro, and reduced HIV-1 reverse transcriptase in a dose- and time-dependent manner (Kalvatchev 1997).

Calendula today, is being investigated for it’s anti-cancer properties. In conjunction with other herbs such as Echinacea purpurea, Scorzonera humilis L., and Aconitum moldavicum, there has been evidence of success in treating certain cancers (Heren’s carcinoma) according to the Fedkovich Chernivtsi State University in the Ukraine.

In one small study of about 250 women undergoing radiation therapy after surgery for breast cancer, a commercial calendula ointment reduced the amount of skin irritation better than another commonly-used commercial preparation. Women who used the calendula ointment also reported less pain from the radiation. Investigations into anti-cancer and anti-viral actions continue.

In animal studies, calendula has shown a tightening effect on the uterus. Although no miscarriages have been reported in pregnant women taking calendula, it is advisable to avoid taking calendula by mouth during pregnancy. In addition, further animal studies suggest that chemicals in calendula may be toxic to sperm and may prevent a fertilised egg from implanting properly. Therefore, couples trying to conceive a child should not take calendula.

Very little information is available on how calendula might affect an infant or a small child. Therefore, its use is not recommended while breast-feeding or during early childhood.

Calendula belongs to the same family of plants that also includes chrysanthemums, daisies, and ragweed. Individuals who are sensitive to any of these types of plants may also be sensitive to calendula.